The whole thing so far

It's a little wonky because of the way I moved the piece, but hopefully once it's off the loom (in another month? January 2014?) and blocked the straight lines will look straighter. I should have adjusted the piece before taking the picture, but was in a hurry because it was "time to go"...

Just a few more rows & I think this sampler will be finished. I want to finish weaving the egg (which was supposed to be a circle) and may attempt a smaller circle on the right side, and I think I know what I did wrong... I was being a bit of a smart-ass and thought I'd do 3 or 4 stitches at the bottom instead of the recommended 6... after it's done, I'll weave a few rows, do the header, the hem fold, a couple more rows & voila. I MAY try doing a few rows of weft interlock now that I have some clear instructions from Jan Austin's blog, I will give it a try! I did do a few weft interlocks and overall I find that slits work out pretty well fro me, but I'd like to use the weft interlock technique and get it down pat.

It's almost 12" wide by 29" wide.. not counting the woven section below the soumak fold line.

Then I'll move the piece to the back and work on something else on the new front.

My next piece will be something I think I know what design I'm going to work from, but it's kind of random... I do have some things I want to try, but I don't have a "goal" or a theme that I'll want to keep coming back to like some people do. One thing I am fascinated by is how colors & shapes can interact in tapestry...

Got a question about blogger: is there a way to do thumbnails that will embiggen in a pop up or another tab?

Kathe Todd-Hooker posted a blog entry here discussing the pros and cons of weaving with bobbins, and also mentioned butterflies. I'll go through my thoughts point by point (but not all of Kathe's points, just the ones that stand out for me... keep in mind that I am still a beginner (advanced beginner? intermediate? adventurous beginner?) and I may (probably will) change my mind as time goes by!

1: Kathe: "Bobbins aren't a butterfly or needle"
Me: I still need to learn how to use bobbins... I find them hard and stuff and harder to handle than butterflies and maybe a little too long. if a 4" golf tee seems too long, the bigger bobbins will seem even worse... again, learning curve still in progress here.

I don't care for using needles when I weave. Long ones, short ones, doesn't matter... once in a while, they help, but most of the time, nahh. Tight spots/adjustments, yeah... back in 1998, when I was going through Nancy Harvey's exercises from her book using a small handheld paperback book sized loom (about 6" by 9"), I got frustrated because I only had one or two needles on hand & was dealing with a few different wefts.. threading and rethreading was a pain...
I had a size F crochet hook, and since I only needed "cut needlepoint lengths" for the yarn, they worked great... I still use them for my smaller looms.
I could have run to the store to get more needles, but my kids were little and at that particular moment (they were 5, 5 & 2), I didn't want to go out... I found that I really liked using a crochet hook since I only needed one.

I don't need a crochet hook on my big Crisp student loom, I use the "magic heddle" to change the shed & a shed stick to hold it open.. it's become automatic, I can use butterflies or bobbins...I never felt the need to use a crochet hook on this loom.

2: Kathe: "Bobbins organize weft bundles" (Kathe)...
Me: again, I probably just need to get better at using bobbins. I haven't had trouble with my butterflies getting tangled up (see how-to make butterfly videos by  Rebecca Mezoff and Noreen Crone-Findlay  (Star Trek hand sign method)), and have also found that I can fit more yarn on a butterfly than a bobbin... the bobbins I'm using are actually 4" golf tees. I can't afford "proper" bobbins at the moment, so there's that. I've had more issues with tangling with bobbins, usually when I forget which end the half hitch is, than with butterflies.

4: Kathe: "Bobbins keep weft cleaner"
Me: I'm sure, especially since I don't always wash my hands before coming to the loom...(I should... probably a new habit I need to form!) but don't most weavers wash and block their tapestries after taking them off the loom?
I don't think I touch every piece of the yarn on the butterflies, so don't think this is an issue.

5: Kathe: "Allows you to twist the weft bundle"
Me: This is one thing I found that I was liking (a lot!!) about the bobbins! It naturally "twists" the different colors together as the weft comes off the bobbins. I found myself occasionally giving the yarn a twist when using butterflies so that the different colors would land in different places in the woven piece. Also, since some of the yarn I have is precut (uggghhh!!!!) Paternayan yarn (hey, it was $1 for a quart sized ziplock bag & I got about 10 bags!), this twist "feature" helps to load more than 1 length of yarn onto the bobbin. It is still fiddly, but the short lengths work better with bobbins than butterflies.

6:  Kathe: "Less chance of tangling."
Me: I find that I have less trouble with tangling with the butterflies than the bobbins. I sometimes forget which end the half hitch is, so I sometimes end up with a knot in the yarn.. easy enough to undo the knot, but that's a little time wasted. I need to make sure that I do the half hitch in the same place each time. Also, if I wind the yarn too close to the point, I stand a good chance of the yarn unwinding and tangling... I start higher on the golf tee than the photo below shows and I add a little more yarn to the end near the point each time I add another layer.

9: Kathe: "Less wear on the weft as great amounts are used/pulled through the sheds"
Me: When I push a butterfly into the shed, it hardly comes in contact with the warp yarns, even the fat ones & they don't stay fat very long.. they come in contact with the warp just a little bit...
Which brings me to another question: How much weft CAN you fit on various bobbins?

On the 4" golf tee, I was able to load 4-1/2 "layers" of yarn, got about 4 yards onto the it while I got about 6 yards of weft in a butterfly. Both of those had a little more yarn than I would normally put on a bobbin or butterly...this is with a worsted weight strand of Briggs & Little Softspun plus 1 strand of needlepoint tapestry yarn, so a little on the thick side. I'm using a 6 epi warp.
One length of the cut yarn covers the bobbin in 2 layers, so for areas when I need a small amount of color, this may not be too bad.

Here are photos of the butterfly & bobbin I wove to measure the above: 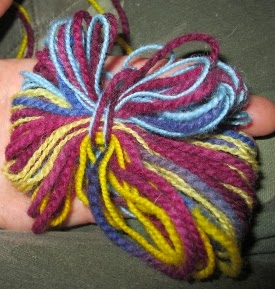 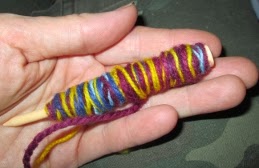 That butterfly is fatter than most butterflies I make but I think if I were to weave with it, I wouldn't have had much of a problem with it... I probably would have had to rewind it about halfway through because it was so big.

One disadvantage of bobbins: the cats may want to play with the dangling ones when the loom is unattended!

Here's an update of my tapestry weaving progress as of this morning... there is a slight overlap between the last photo I took of "The Whole Thing So Far" on the October 19th blog entry and this.  There's hatching, pick and pick, soumak (the narrow red and pink section), hatchure practice, triangle shapes, a square and a rectangle: 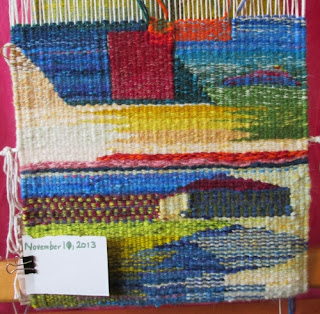 And here's my attempt at weaving a circle... anyone want an easter egg that looks like a setting or rising sun? 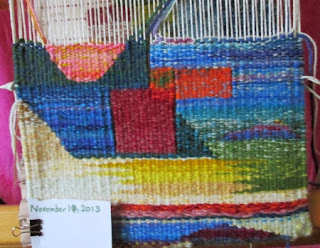 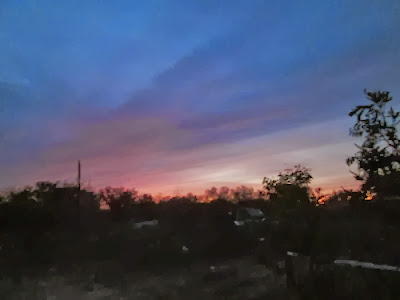