The Hope Of Kntting & Weaving adventures...

I've been working on and off on Evan's cat rug... it's a locker hooking project... hopefully it will be ready for him to take when he moves... I don't know if he will want it as a pillow or a wall hanging... we will see! I found the printed canvas on ebay & it's supposed to be a fabric needlepoint, but I decided to locker hook it instead...

I've also been coloring a bit & reading too many messages about coloring/coloring books/coloring tools and Reuven has been coloring as well...he's been working on one picture since Evan's graduation night (on May 29th) and I've just been jumping around between projects/wannados... coloring has gotten pretty popular. Coloring takes the pressure off feeling that I have to come up with my own ideas... eventually I will....the rain we had has caused Texas to "grow some creeks, fill some lakes" and I love water, so maybe I'll get to do some water compositions...

I've also been going through patterns for making a shawl since last week I got to go to Hill Country Weavers in Austin and bought some yarn... I don't know what the Jupiter Farm "Zooey" is going to be. but the Classic Elite "Cricket" in pumpkin is going to be Christie Pruitt's Inspiration Capelet:

This is the yarn color: 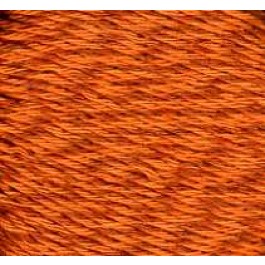 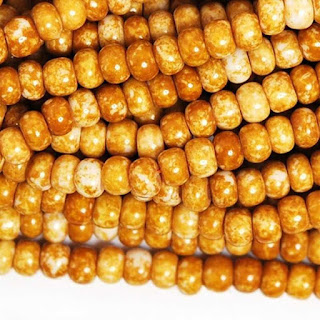 I also may do a different (but somewhat similar) stitch pattern for the capelet, will swatch & see if I can make the numbers work!

I worked a little on my Color Affection (aka Color Insanity) shawl, but I don't love it & it seems to be going really slowly when I do pick it up... according to my project page, I started this almost 3 years ago.June 1, 2015... almost 3 years later, I'm playing with this pattern again.. I do pick it up every so often. I'm not in love with it, partly because I don't like the long points, so I've been dropping some of the increases, and hope to somehow make the back come out longer if I ever actually finish this as a shawl...  this project is further along than the Ravelry photo shows... I now have the project on a 50" needle, so maybe I can take a picture soon to show an update... it's not that bad, just... tedious.  The colors are cool, though! Here is the photo I took almost 3 years ago:... there's a fair bit more donesince the photo and one additional color, a sparkly gold.. the sparkles are very subtle... 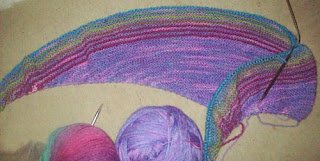 I have a couple of other things that I'd like to finish, like the Beauty & The Beads shawl... I've done a lot more on this project since this photo, it has about 1,000 stitches...to get a decent photo, I'll need to put it it on at least one other needle so that I can stretch it out : 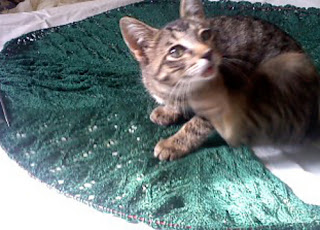 I get bitten by the shawl bug when the threat of cold weather lets up! :)

One other project I'm looking forward to is this one:

I'm gathering the yarns for it... the yarn has been discontinued, but people are selling it online... if they weren't, I'd find other yarns, but the called for yarn is SPARKLY and that is going to be fun!

The kitten in the photo above is Peppurr... she's about 3 now and had kittens a year ago... (she's spayed now!) and is pretty sweet... she has the prettiest green eyes.  We kept her 3 kittens..

I'm working with a tapestry weaving mentor online & when she gets back from her trip, we'll work on circles...