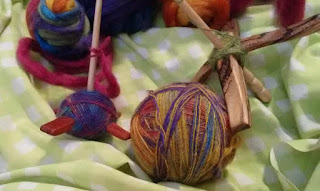 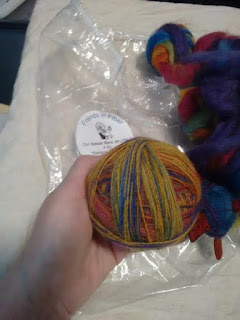 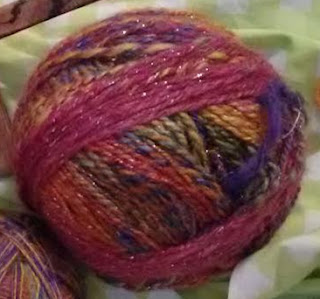 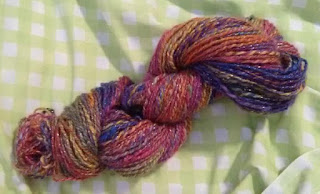 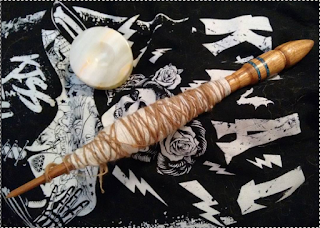 Posted by Jessica at 9:02 AM No comments:

I love my little Hokett looms, as well as the tools he makes. I've sold a fair few, and plan to sell more.

I'm planning on getting some mini warping reels. They are sooo adorable! They can warp up to 7 yards (depending on yarn thickness), and would be great for a short warp or a rigid heddle loom.

I wish I had some weaving to show off, but I've been a wee bit obsessed by spinning on spindles! Here's my latest plying project: 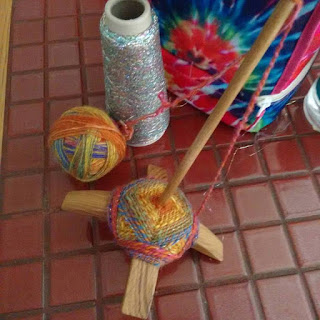 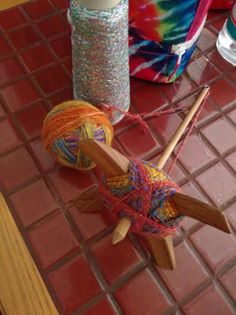 I hope to have the fractal ply on the niddy noddy sometime this week... this plying process JUST might be the thing to motivate me to get my wheel back in commission! I think the wingspan pattern may be a good one for this yarn, but I need to see how much yardage I can get out of this braid of yarn. If I need more, I have another 3 ounces, and if I need even more, I can get more from the seller I bought it from. I haven't measured to see how many wraps per inch I'm getting with this spin, but I'm guessing it's about DK or light worsted...it's a fun project, and feeds my soul.
I have a couple of other spinning projects in progress as well, which can be seen on my instagram page

with weavingrainbow for the username.

In other news, I wonder if we're skipping summer a little bit this year? It's still March, buuuuut... I've heard that the wildflowers are going to be gorgeous!

Posted by Jessica at 3:44 PM No comments:

I recently started posting photos on Instagram. My username there is weavingrainbow.

You can see photos of my spinning adventures there, and here are a few: 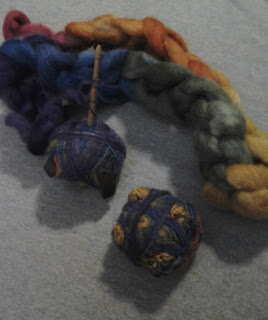 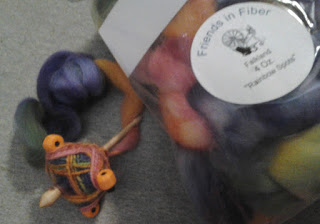 Posted by Jessica at 9:06 AM No comments:

I've got a diary planned for 2017... at the outset, I'll use my "legal pad" sized copper loom.. in a month or two, I'll get the parts for a loom using galvanized pipe. I checked a few places for pipe,and may get it locally or from Zoro... maybe it'll be the approach to 60 project and beyond... we'll see.

I got sidetracked from that for now to do a few pink pussy hats for the Women's March on Washington that'll be happening 2 weeks from today.

Once I get the hats going, I'll gt back to the copper loom. I don't know what I'll weave, but will definitely weave 2017 at the bottom. I'm not sure how I'll put the date... maybe Roman numerals?
Posted by Jessica at 10:03 PM No comments: