I recently completed my piece for the ATA Untitled/Unjuried show that will be held in Minneapolis this summer. It took me about a week to weave, several months to hem & haw about & I finally got closer to an idea for what composition I would weave when we were in Austin at the end of February.  At first, it was going to be based on Starry Night with a Tardis, and then I decided I wanted to put something musically related and thought "hmm, one of the 3 musicans (Picasso)"? So that's what i've got. The piece is titled "One of the 3 musicians and a ukulele". Maybe the word "unplanned" should be in it somewhere... I'm not sure. I started out with this idea: 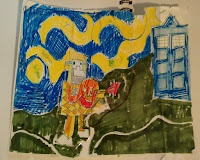 Then decided to eliminate the Tardis & the Musician... as I wove, I decided to put the musician in after all, and wove it: 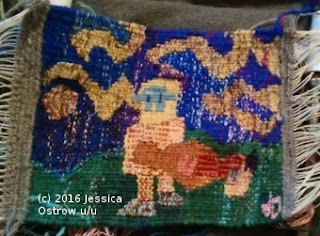 I used different yarns & some silk hankie fiber. Wool, wool-silk, and even a wool blend that had some acrylic in it. I made an exception for this piece because I saw the yarn & thought it would be great for the squiggles. I'm happiest with how the sky came out in this entire piece. Eventually, maybe I'll do better with musical instruments, if I decide to weave them again...

I re-warped half of the loom right away, this time with cotton seine twine. We'll see how I like it, but my first love is wool. Sarah Swett feels the same way and discussed it in this blog entry. I think I decided that I like wool warp from the early days when I was playing with Navajo weaving.

I have another project coming up that I'm kind of excited about, a fake journal. Roz Stendahl started it.  I haven't decided what I'm going to do in my fake journal, we'll see... be another person or be in a different time or dimension or WHAT? Older? Younger? Dunno... We'll see. I'll decide on Thursday... I picked up a few books from the thrift store to take apart to put new paper in... OR I might get an art journal, perhaps the Strathmore mixed media book... or both.

Posted by Jessica at 7:21 PM No comments:

It's been a LONG time since I posted. Hopefully people will just get notified in email that I have!

I have been knitting & weaving, and maybe I've posted a thing or two on my Ravelry page. Check patchworkgirl's projects there if you wanna see.  I guess I just don't love taking pictures, or rather, uploading them, cropping, and re-sizing them once I've taken them.

The next couple of weeks will be devoted to getting a piece ready for the Untitled/Unjuried show in Milwaukee... or maybe not. I want to get the "Harrison" tapestry finished first so that I can use that loom. I've got other looms. I want to use this loom. 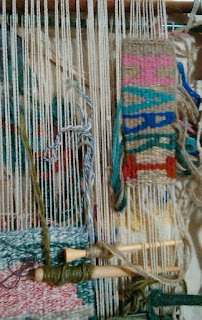 This past weekend, we went to Austin for Jugglefest. I always make sure to go to Hill Country Weavers when I'm down there. It's about 15 minutes walking distance from the Gym where Jugglefest was held at theTexas School for the Deaf ...I went 4 times last weekend: Saturday, once before & after lunch & again on Sunday morning & before we headed out of town.

The last trip was because I had an idea for a specific project for some yarn I saw there... while walking back to Jugglefest, I passed an artist that had some pretty cool colored drawings. One of them was of the 11th doctor, and I would have bought it except I was not sure which doctor is my son's favorite doctor. I got her card with web info.

As i was walking, I thought "hmm, maybe I should get back into practice doing portraits." then I thought, "or maybe try doing a part of a portrait for a tapestry, but I don't know how well I'd be able to do that, and with so little time, trying a new technique? Um. No. I then thought that I should do that Tardis based tapestry that I've been wanting to do and enter it in U/U. Then I realized I should have bought tthe yarn that had the most yellow in it rather than the green based one and that's why I decided to go back so that I could get it. 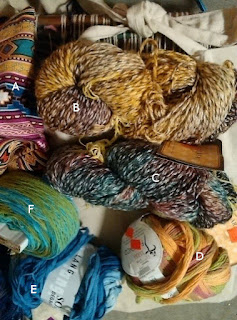 Hopefully the letters are visible.

A: this is a juggling bag that I bought from Juggling Thingies for small yarn projects. John Nord (the proprietor) pretended to be horrified by the idea!
B is the last yarn I went back to get with the tapestry project in mind..
C is a yarn I bought just because I like it (same type as B, different color).
D & F are ruffle scarf yarns by Trendsetter called Flamenco. I still haven't quite figured out how to use it except for rolling the yarn stretched out (F) onto a piece of cardboard to hopefully make it easy to work with. I don't know if I will knit with it or crochet with it.
E is a cotton "shoelace" yarn that is so soft that I am using to make an Amanda hat.