I'm currently doing a sampler because I had trouble with some techniques when working on the last piece I wove (shown on my blog back in June, http://weavingrainbow.blogspot.com/2013/06/tapestry-weaving.html) I figured a little help with joins would be wise.. and while reading about the sampler, I had forgotten about lazy lines for large blocks of color.  I'm still wondering about them, maybe under a certain size, they aren't necessary?

I'm and also reading my other books about the technique. Although this can be confusing, I'm finding that reading one, then reading another helps clarify things & also once I started working on the wavy lines technique, i found it interesting that Carol Russell's instructions for the inital wavy lines selvedge was done horizontally instead of in sections as shown in Tapestry 101.

Just for grins, I may try weaving a block of solid (or semi-solid, for interest, but ONE YARN) color, weaving straight across on one of the paperback looms & using lazy lines, same yarn, same warp, same size on another piece & compare. Might not be able to see the difference in that small scale, though?  I may not do this, but it's an idea...

Still no pictures, partly because the background where the loom is located is a mess right now & partly because only a little bit is done, and partly because it's a cloudy day... maybe tomorrow... maybe I'll just cover up the mess...or put a cloth behind the loom (which would show the weaving better, anyway!)

The loom calls! Ta-ta my pretties!
Posted by Jessica at 10:16 AM No comments:

Since I wrote last, I picked up a Crisp tapestry loom.  I have it warped with the warp that was on it: I pulled out the 1 or 2" of weft (acrylic, eeek!) and then I undid the warp and rolled it into 3 balls. (There were 3 knots in the warp, so I made 3 balls since I don't want to warp all the way across right now.  The warp feels like some kind of strong cotton. (It doesn't break easily when I pull with my hands.) I wonder if it is carpet warp?

Here is a photo of the loom at the seller's, I still have not taken my own photos of it: 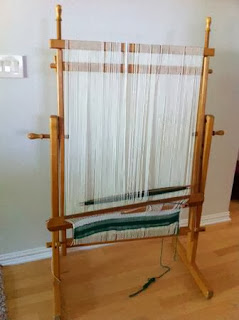 I put on 51 or 61 strands (51 plus the edges: 3 as 1 and 2 as one, which I'm hoping will give me straight selvedges).. so far I like the loom & the tensioner is great..  the shedding device is simple & I may come up with some other shedding device for it later on, I don't know: right now, I use the "magic heddle" to create enough of a shed to stick a shed stick in, and since my loom came with 2 simple shuttles, I'm using one of them as a shed stick since I won't be using either of them to carry yarn... that's just not my way, besides I'd have to have a zillion of them: one for each color.

I haven't tried bobbins (maybe I tried them years ago, I don't remember) and it looks like I'll be using my fingers to pull the weft through the shed instead of a crochet hook, so I may learn how to wind a butterfly properly: in the past, I've had trouble keeping a butterfly from making a huge tangly mess, so maybe I WILL use bobbins, I don't know.  With my smaller looms, I have been able to leave a long length of yarn like one would use for needlepoint or cross stitch, but with the bigger looms, this could be problematic, so I will see!

I won't need to use a crochet hook to pull the weft through the sheds now that I can have EITHER shed open. This is awesome for me!

I haven't decided what to weave first: I don't know if I should do a sampler to refresh some of the techniques, particularly the various interlock techniques... and weft directions... or do something more interesting than that.. or both. There's PLENTY of warp (about 7 or 8 feet since I warped the loom with a dowel in back so that I can use all of the warp).. but I doubt the warp is quality warp, and because of that I opted to use Briggs & Little Regal which is reasonably easy to get... the next warp I'll use will be a good quality, probably cotton seine twine, which I will get as soon as I can afford it.

I currently have 2 paintings showing at the Wine Therapist in Dallas. One is mixed media with acrylic paint, threads, sequins and rhinestones;  the other is acrylic paint on canvas. We didn't get to the opening because of Gary's work schedule: if he had been able to get out at exactly 10pm, we might have made it. We still need to get over there to see the show. Maybe next time he has a day off...

The paintings feature my character "Girl-Blob", which I came up with in the late 1970s when I was in college. I found a couple of pictures of her when browsing through my old sketchbook. I'm glad we didn't lose the storage stuff in the wildfire for sure!

No photos today (except for the Crisp loom photo) maybe next time!
Posted by Jessica at 7:30 AM 4 comments:

The process of building my larger loom is going slow, but we're having to gather all the needed pieces. Today the bottom spring kits came for the 22" wide loom and the smaller 10-1/2" loom. The 8" spring kit fit perfectly in between the elbows at the top of the smaller loom: 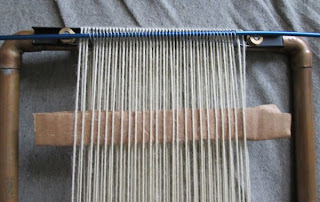 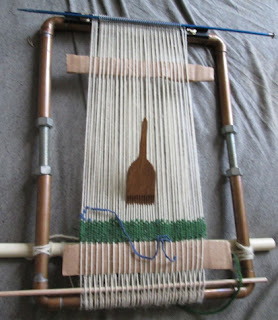 I loosened the warp so that I could install the tray for the sping & then put a spring in and then put all the warps in place. I used the 8 dent spring.  Since the loom was already warped, I didn't want to take the warp off to re-do it, so I have 2 or 3 extra warps on each side.  It'll be nice not having to adjust the spacing of the warps before each weaving session!

I plan to take out the green header seen in the above (2nd) photo and doing it over so that the spacing lines up with the spring...

The following 2 photos show Gary using the torch to solder the elbows to the top section of the loom: 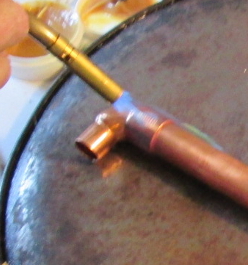 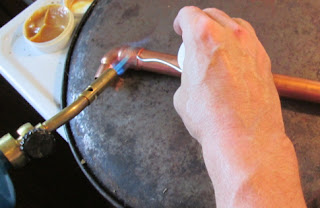 There is still more assembly to do and we need to pick up the 24" threaded rods from one of the hardware stores next week.

We've been taking care of a kitty in the park, bringing food and trying to develop trust.  I don't know if it's a male or female, but s/he is cautiously friendly.  The last 3 times, s/he has been sitting closer  to us, but won't let us get close tnough to pet. The kitty's name is Pelham, after the park. 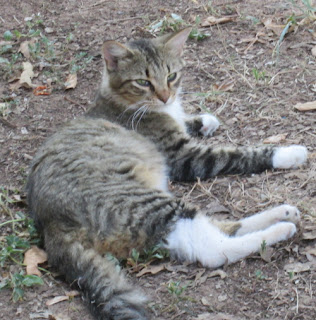