I made a vegan roast... we'll see how it comes out. It's from one of my favorite YouTuber's, The Vegan Zombie... from his holiday series... roast & gluten free stuffing.. (which is weird because the roast is NOT gluten free, but the stuffing is GF.. and it is SOOOO good.. cauliflower, carrots, onions, celery, spices...maybe someday there will be a gluten free roast..)


Here's a photo of it before baking: 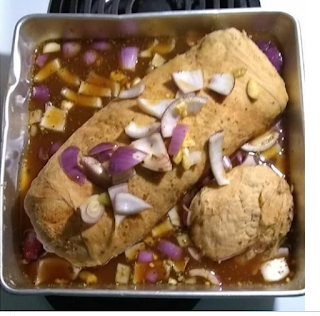 And after, but before turning it over & covering it in parchment paper & wrapping in aluminum foil: 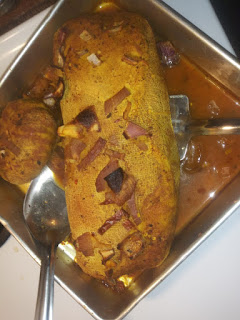 Later, when we get to our friend's, we'll remove the cheesecloth & reheat it... it looks dry, but this is before turning it over, which basted it. I also added the rest of the stuffing to it...the basting broth tastes a little spicy. I'm curious about how the roast tastes. That mini roast is for testing... I may try it before we go.

I read other recipes & rejected them for different reasons: mostly because of comments from others that made it. If I have time before we go, I may make a seitan only roast, or may save the comparison testing for another time.

I hope to get some knitting, spinning, and weaving time today... I want to finish the tuck scarflette, and work on Beekeeper's Cardigan, which I'm not sure I still like...I'll try to get someone to take a progress photo of it on me..and maybe swatch for Penguono...do a little more spinning for the Shetland socks, and maybe do a little weaving on the arched loom... wedge weaving perhaps, or a postcard...the arched loom makes a good postcard size, and if you're careful, you can make it sort of fringeless, or you can make a lot of fringe by warping around the loom. I'll post photos of it in a few days.

Did I mention that I still have some of Jim Hokett's cocobolo kits? They're 8 dent, and are the 'regular" 7" by 8" size. If you're in the US, you can order yours at this link.  You can also ask me about Cottage Creations patterns: I have a few left.

If anyone wants Jaggerspun yarn, now is a good time to order it as the prices will be going up around the middle of December...

On Rebecca Mezoff's blog post here, she talks about meeting Archie & Susan, and others have talked about their experiences meeting them. Here's what I wrote:

"I went to a workshop in Weatherford, OK in April of 2015, at SWOSU, Southwest Oklahoma State U... He spoke with my son (then 13) about his unicycle for a bit on the last day.. my son also wove a bit with us that day.. Good memories!
Can we post pictures on here?"

Here are some photos: 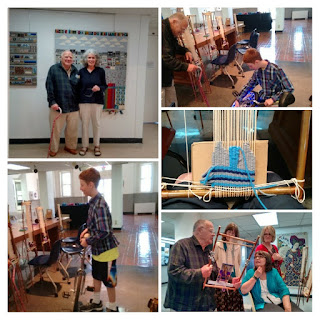 I'd love to know who's following this blog! Leave a comment!