On April 9th, 2009, the day we lost our house to a wildfire that claimed 9 houses in our town... If I had to do things over & grab 6 or 7 more things (I could have, the fire wasn't near our house yet), that loom would be one, my guitar, my Hagen loom, some yarn that I hand painted, and a little journal my mom wrote, and my computer... I was burned out on weaving, but it still would have been nice to have had that loom.

No one told me how hard it would be when kids moved out...especially when they live far or decide to estrange themselves...you get so involved with caring for them, doing stuff with them, etc.. and then one day they're off. I'm proud of my boys, they've been through a lot, learned a lot...

I feel reasonably healthy & hope I don't find out I have some hidden cancer or something with a harsh treatment that'd ruin my health overall... my roommate, not so much.. last month, he had his gallbladder removed, and is still figuring out what's possible diet-wise... he had a quintuple bypass (traditional) last year.. has trouble breathing from emphysema..

I'm hoping to get some more natural colored fiber for my 2nd sock. I have about 250 yards spun so far, I think it's sport weight, so I'll need more yarn to finish this up.. I just found 3 colors that I need on eBay & hopefully I'll find some Ashland Bay grey shetland as well... I think I found some, but hopefully the seller will sell a smaller amount.

I'm further along now than the collage shows, have approximately 1/2 spun for the 2nd sock: 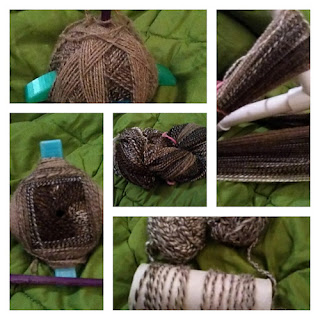 I've started a toe on the first sock: 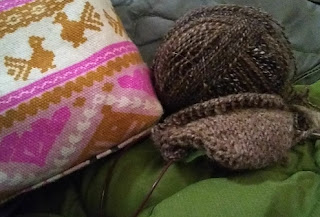 Beekeeper is quiet, I want to finish it, but am not sure how long to make it before starting on the ribbing... I'd also like to make Stephen West's Penguono: 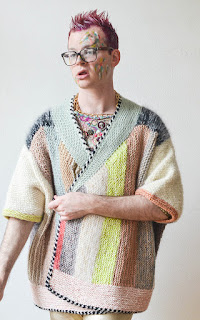 and have been collecting some older Chelsea silk yarns for it:

plus a few other colors...pink, pale yellow, greens, blues, etc... the skeins from the photo above have been "put away" in a "safe" place... not sure where...

I also have a scarf in progress... anthro inspired scarflet: 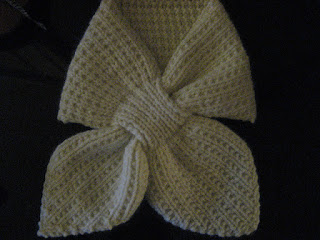 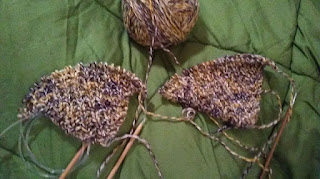 This isn't an updated photo... I'm about 3 or 4 inches beyond the slit. Before I embarked on knitting, I tried on a size 6 and 7 needle, and liked the 7 better...

Tata for now, my pretties!